More than 150 dams are currently planned for five of the six major Andean tributaries of the Amazon River. Damming those large, free-flowing streams would provide hydropower to half a dozen South American countries – meeting their energy needs for decades to come, but with unknown, potentially calamitous environmental and social impacts.

While it is true that poorly planned hydroelectric projects can have dire environmental consequences, well-planned and well-placed dams can offer a local renewable source of energy to meet the requirements of expanding populations and economies. Providing plentiful hydropower and also preserving Andean river watersheds, some experts say, is possible. According to the World Commission on Dams in 2000, dams provide water to 30 to 40 percent of irrigated land, and generate 19 percent of electricity worldwide. On the flip side, an estimated 40 to 80 million people have been displaced by dams, while 60 percent of the planet’s rivers have been impacted by dams and diversion.

“Hydropower can be part of a sustainable energy future if designed and operated in a manner that avoids and minimizes impacts on vital river functions. The degree of the impact is very much a function of good siting and design,” Jeff Opperman, lead scientist for The Nature Conservancy and the Great Rivers Partnership Initiative told mongabay.com.

Good planning is the first step to building a low impact dam, and informed site selection is the most important and effective environmental mitigation measure, say researchers. Choosing the best locations for dams in the Andean Amazon will require basin-wide strategic environmental assessments. These impact assessments should be guided by independent scientific research and include meaningful, widespread public participation. 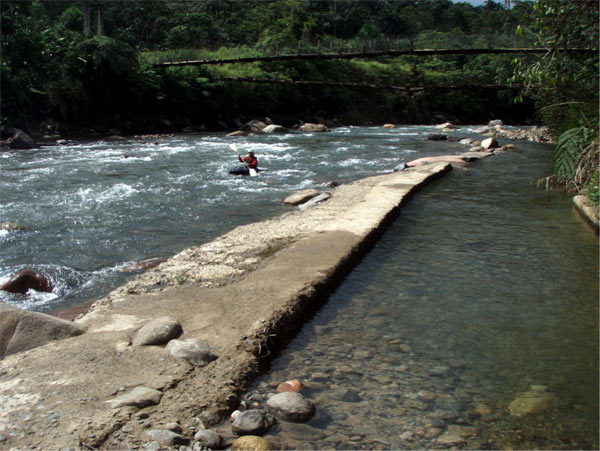 Roberto Carrera paddles by this sustainable, free-flowing diversion structure for a small hydroelectric project on the Misahuallí River in the Napo Province of Ecuador. It was built many years ago without heavy equipment or machinery and still operates today. Photo credit: Ecuadorian Rivers Institute.

There are many things to consider while planning dams, including habitat and resource quality, natural and cultural heritage sites, existing river uses, natural and existing barriers to fish migration and ecological connectivity, as well as existing roads, power and transmission infrastructure. Future needs for growth and expansion should be carefully balanced against the need to maintain strategic free­flowing river corridors and the consideration of other renewable energy alternatives.

“It is important to understand that any river-wide dam structure that disrupts a free-flowing river or watershed system causes irreversible and permanent impacts, and that the level of impact is not necessarily related to the size of the hydro project, but rather where the project is located, how it is designed and how it is operated,” said Matt Terry, executive director of the Ecuadorian Rivers Institute.

Dams built on large, main stem rivers in the Andean Amazon have the most significant and far-reaching consequences, since these dams disrupt ecological connectivity at the entire watershed level. An ideal strategy for preserving Amazon connectivity, therefore, would be to avoid putting dams on the remaining free-flowing main stem rivers, such as the Napo, Santiago, Marañón, Ucayali, Japura and Negro rivers. “Free-flowing” watershed corridors would be designated for permanent protection along these drainages to their sources in the Andes. 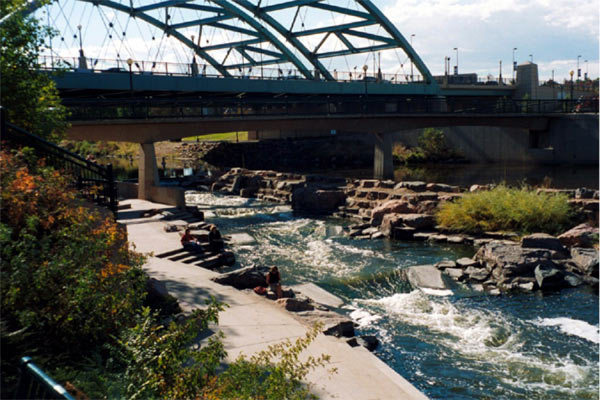 “There are fewer and fewer places where new large dams can be viably developed. However, one large hydroelectric project may be better than 20 small hydroelectric projects,” said Matt Terry. “Once a large hydroelectric project has been developed on one major Amazon tributary, and the damage is already done and the ecological connectivity is lost, perhaps additional hydro projects should be prioritized for development in acceptable locations on that same river in relation to the existing project.” That way, the additional impacts of the new project will be minimal compared to the large-scale, watershed-level impact of the original project.

Ecuador’s Paute hydroelectric complex is an example of a series of dams that are being developed to make good use of an already impacted waterway to optimize hydroelectric generation. The project is centered around a large, already existing 1,075 megawatt (MW) dam on the Paute River. It was recently complemented by the newly built Mazar dam, located not far upstream, which reduces sediment loading to the Paute dam, increases water storage and regulating capacity, and adds 163 MW of generating capacity.

The Sopladora project, when completed, will efficiently increase generating capacity yet again. It will use the water that flows out of the Paute dam turbines to produce up to 487 MW of electricity at a second downstream powerhouse. The final studies for the Cardenillo hydroelectric project are underway now and will complete the Paute scheme, adding another 564 MW of electrical generation. The generating capacity of the original Paute dam could also be increased by up to several hundred megawatts by simply incorporating newer and more efficient turbines into the existing power plant. 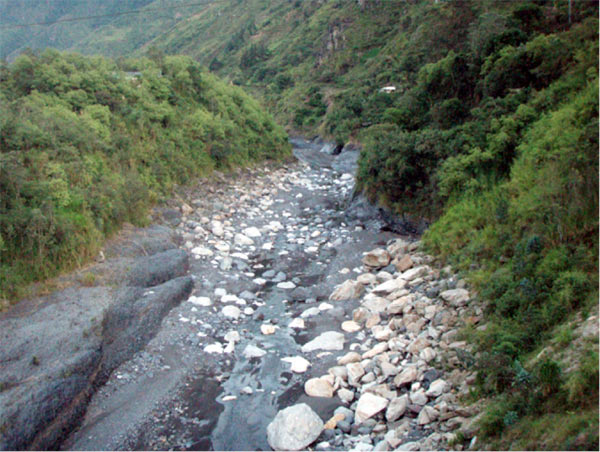 Since the original Paute dam seriously impacted watershed integrity when it was built several decades ago, building additional hydro projects will do minimal harm to connectivity. These new Paute River projects are also close to large population centers, transmission infrastructure is already in place, no communities will be displaced, and no river users affected. When completed, the entire project will have a total potential generating capacity of over 2,000 MW, providing more than half of Ecuador’s total electrical demand for many years to come.

Hydroelectric dams designed to preserve ecological connectivity are another solution. “Modern, free­flowing diversion structures – which integrate into the natural river channel morphology; allow passage for fish, sediments and recreational users; and preserve ecological function and connectivity – should be incorporated in place of river­wide dam structures for ‘run­of­river’ hydroelectric projects,” Matt Terry suggested. “Off­channel reservoirs should be considered to provide regulating capacity when needed.”

These free-flowing diversion structures should “satisfy environmental flow criteria, and leave more flow in the river than is diverted for hydroelectric generation, and preserve a natural flow regime in the affected river section,” Terry added.

Ecuador’s Pucara hydroelectric project offers an example of an existing small dam with very minimal impact that generates up to 71 MW of electricity. For this project, the storage capacity of a natural, high-elevation mountain lake was increased and reinforced with an earthen dam. Water is drawn directly from the improved reservoir through penstocks to a powerhouse located inside the mountain and out of view. After generating electricity, the water is discharged back into the lake’s natural outflow drainage at the base of the mountain, and also contributes flow to an irrigation canal. The project has a relatively small footprint in a well-represented habitat zone; does not disrupt ecological connectivity; does not affect any known river users, and benefits local farmers by providing regulated flows for irrigation.

Matt Terry suggests that one way to move forward and begin building better dams, is for an organization such as UNESCO to “establish an International Wild and Scenic Rivers Program to protect emblematic rivers with outstanding resource values.” The RAMSAR convention provides a valuable tool for preserving wetland habitats, and could possibly be successfully applied to protecting free-flowing watershed corridors. 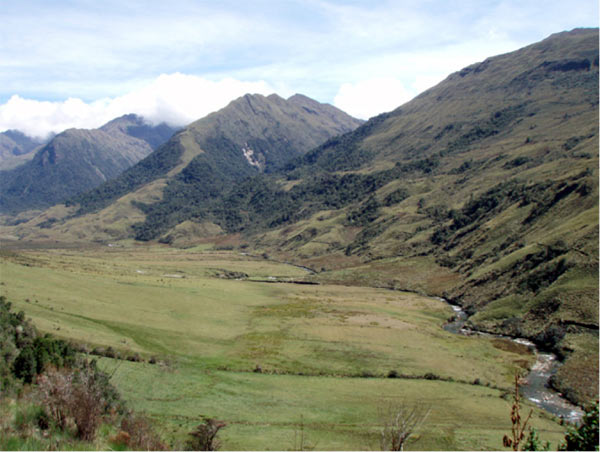 Rain and snow give birth to this Andes Mountain stream, which flows uninterrupted from its source toward the Amazon. Photo credit: Ecuadorian Rivers Institute.

“In the context of the Amazon Basin, this policy would need to be endorsed by all Amazon countries through the Amazon Cooperation Treaty Organization (OTCA) or another regional platform,” Terry said, adding that a UNESCO river protection program could be applied to preserve strategic free-flowing river resources around the world. These watershed protection programs could be potentially funded through the contribution of 1 percent of hydropower project electricity sales, amongst other sources of funding. CDM carbon credits could be applied to preserving riparian river corridors, rather than as an incentive for developing new hydro projects. “If a hydro project is not economically viable on its own merit, it probably should not be developed in the first place,” concluded Terry.

With more than 150 dams still in the planning stages, now is the time for a significant investment in scientific research into Andes to Amazon fisheries, river ecosystems, biodiversity and ecological connectivity throughout the Amazon Basin. Such investigations are especially critical in the transition zones between the Andes Mountains tributaries and the main stem of the Amazon. Most importantly, regional and national priorities need to be set for protecting and managing migratory fishes and fisheries, including the reintroduction and restoration of native species.

Providing long-term, sustainable energy solutions while simultaneously conserving watershed ecosystems is a worthwhile and achievable goal. There are a handful of dedicated and capable people with great ideas who are working towards this end, but the issue is large and deeply complex. A watchful and informed public will be an important factor in shaping these projects as they move forward. And if we continue down the path of traditional hydropower development in Amazonia, who knows what we may lose?

Gary Morgan is a healer who utilizes the insights gained from ten years experience living with curenderos in the jungle of Peru, alongside a lifetime’s study of herbal and plant based medicines to create natural treatments* for almost any ailment. Along with being a founder member of the A.S.A.P. community, Gary intends to share his recipes […]

Restoring balance between man and the natural world